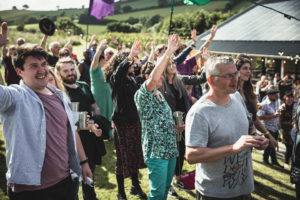 Riverford is an organic farm and UK-wide organic veg box delivery company. We currently have 1,076 co-owners, from growers and box packers to delivery drivers and IT experts.

In 2018, Riverford became employee owned. We believe that this has made us a better business in two senses. In ethical terms, working here is fairer, more enjoyable, and more fulfilling; and in business terms, we are more efficient, creative, and profitable because we are all working for each other.

“We do it our way” is our rallying cry! We all share responsibility for our success, and we all share the rewards of that success. It’s a two-way deal.

Indirect ownership – fairer for all

Our founder, Guy Singh-Watson, working with the Board and a group of then staff (now co-owners!), agreed that the shares of Riverford should be held in trust for all co-owners. So far, 77% of the company is owned by an employee trust, benefiting all Riverford co-owners equally. Guy has retained 23% and continues to play an active role; he eventually aims to hand over all shares.

The founder’s Wishes and the Riverford ethos

In May 2018, before we became employee owned, Guy finalised a written statement of his ethical ambitions for Riverford, in a document called the Founder’s Wishes.

In focusing on the differences between us and conventional businesses, his Wishes are intended to be engaging, challenging, and human. They are incorporated into our Trust Deed, the legal document which defines our ownership and how we are governed. 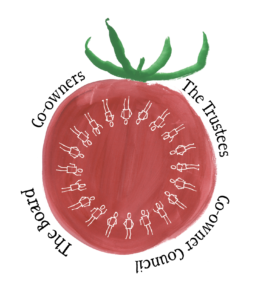 The Trust Deed requires that we govern ourselves through three interlocking governing bodies:

Each plays a different role, but they work together…

The Trustees are the ultimate guardians of Riverford’s ethos and purpose. They protect Riverford from being sold, and ensure that the Board upholds our principles and considers the interests of all our stakeholders (co-owners, customers, suppliers, the environment, and wider society) in all of its decisions.

Essentially, they are responsible for making sure that Riverford is being run as it should be, for today, tomorrow, and long into the future.

The Trustees meet once per quarter to consider the impact of business decisions, hold the Board

to account for their leadership, and offer a course of appeal on disputes around values, work environment, or broad management challenges.

We have five Trustees: two independent and external members; two members of the Co-owner Council (who may not be Riverford directors), who are democratically elected to their Trustee positions by all co-owners; and Guy, as he holds at least 10% of the shares of Riverford.

They are responsible for running the business day-to-day, and setting a strategic direction; for our financial performance, our culture, and for upholding our values and purpose. The Board is held to account by the Trustees, and supported by the Co-owner Council.

The Council meets once a month, and works with the two other governing bodies to ensure Riverford’s long-term success. They leverage the power and voice of all Riverford’s co-owners, offering insight and perspectives from every part of our varied business – all to help our leaders make the best decisions.

To make sure the Council is representative, Riverford has been split into constituencies: groups of co-owners who democratically elect one councillor to represent them. There are 23 constituencies across the business, each containing roughly 40 co-owners. Some constituencies are larger, so have elected two councillors. In total, we have 24 councillors and an external chair.

Following our last election in October we have also welcomed the introduction of Co-owner Council Deputies (the co-owners in each constituency who received the second highest number of votes were offered this position).

The deputy role was introduced to support councillors to fulfil their duties, and now plays a key role in ensuring all co-owner voices are heard.

“The Co-owner Council is the key ingredient that makes employee ownership at Riverford really work. Councillors play a vital role in making sure that not only are we a great place to work for all current co-owners, but that we are successful as a business for generations to come,” says Charlotte Tickle, Director of People, Finance and Change.

One important feature of how we govern ourselves is a subset of the Board and the Council: the Remuneration Committee. Comprising three Co-owner Councillors (appointed from and by the Council), one Trustee, one non-executive Board director, and two other Board members.

The Remuneration Committee meets at least twice a year, and has a broader remit than other businesses’ remuneration committees. Ours can make any recommendations to the Board around any area of pay and benefits, not just senior executive pay. Their remit also includes our benefits packages, and is not just restricted to pay.

How do the governing bodies work together?

The interplay between our three governing bodies makes sure that every co-owner’s voice can be heard, right to the very top of the business. This isn’t just true to our values; it also gives us invaluable insight, and helps us to make the best, fairest, and most informed decisions.

Members of our Board attend most of the monthly Co-owner Council meetings, giving the councillors business updates or specific subject overviews, as well as supporting on any hot topics raised by constituents.

One external Trustee also comes to the Council meetings to observe. This has brought vital issues to the awareness of the Board and Trustees before – for example, when declining product quality was reported by multiple production department co-owners to their councillors, giving us an early warning of a concern that needed to be addressed urgently.

Two Co-owner Councillors join Board meetings on a quarterly basis, to update the Board on the key subjects that the Council are focused on. Th 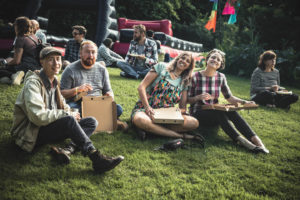 e Council also often forms working groups to focus on specific subjects; for example, they have recently been tasked with improving our maternity/paternity benefits, following requests from co-owners.

The two internal Trustees (elected by all co-owners, from the Co-owner Council) have dedicated time on the Trustees’ agenda, to update them on projects and offer feedback from the Council.

The three Chairs (of the Council, Board, and Trustee Board) meet every other month to see where any topics of interest are crossing over and ought to be worked on together.

Our governing bodies all have a responsibility to make Riverford stronger, to protect it for the long term, and to ensure that our strong values remain at the heart of all we do.

Open and honest conversations are critical; this can sometimes involve asking difficult questions, but ultimately, we trust that we’re all working for a shared goal that we all believe in.