3P Innovation – Is Employee Ownership the UK’s answer to the Mittelstand? 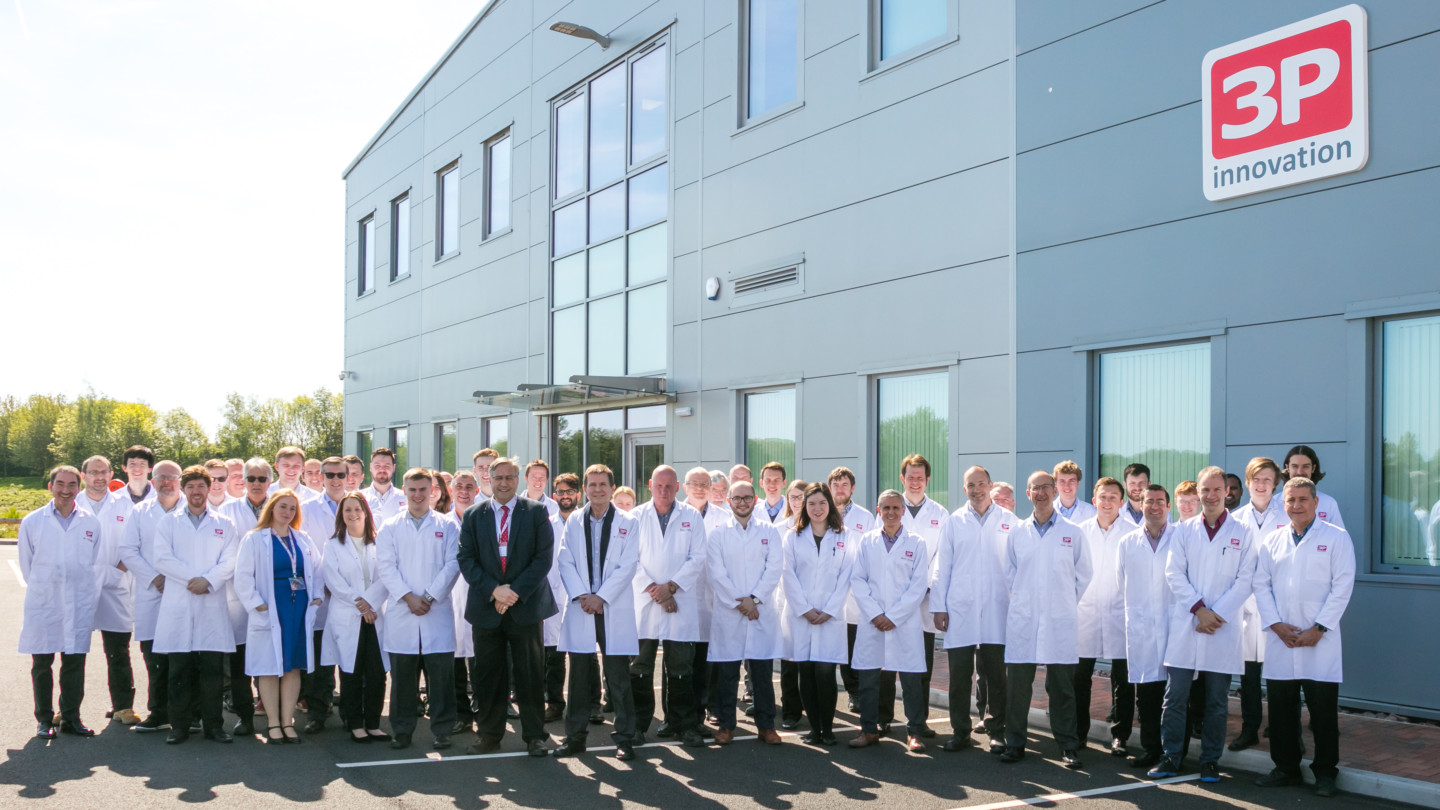 In 2006, a group of six like-minded engineers formed automation company, 3P innovation. A lot of the “DNA” built into 3P from the start came from what they had observed within successful German Mittelstand companies. They formed an “open” company with high quality engineering at the heart of everything they did. It is probably no accident that 15 years later 3P is an employee-owned business that looks and feels like a Mittelstand company..

‘Mittelstand’ is a German term that defines a long-term business mindset and ethos within business. In theory, it covers companies of less than 500 employees, but some larger firms (e.g. Robert Bosch) are also deemed to be part of the Mittelstand. Typically, they at the forefront of innovation, often regarded as world leaders and they focus on a niche, which they then typically export around the world. Germany is an exporting power house due to having 48% of these smaller niche world market leaders… the Mittelstand! They tend to be multi-generational family owned or, in some cases, they have a trust ownership structure. They also tend to integrate vertically to ensure they maintain control of the quality of their products throughout manufacturing. They have flat structures and also take decisions for the long term (meaning 10-20 years), such as their investment in training staff, buildings and capital equipment. It has been described by some authors as “patient capitalism”. This is not about a “fast buck” but about building wealth over the long term and sharing that wealth generation with the local community. 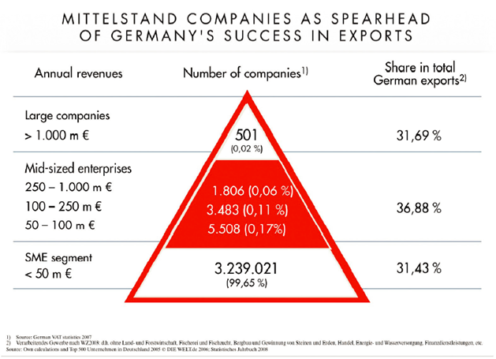 So, with the above in mind, 3P’s founding engineers focused upon the niche of medical device and pharmaceutical custom automation. They set about becoming recognised as one of the world leaders in this niche. As per the Mittelstand, they invested in their engineering talent. The first employee who wasn’t a founder was a graduate engineer and the second an engineering intern. The internship and graduate recruitment and training programs are well embedded within 3P to this day. The business has retained a flat structure and from early on 3P has been an exporting business (the first client was a UK big pharma client and the second was a US big pharma client). Rather than take on debt to fund the growth of the business, they chose an arguably slower but safer route of self-financing growth, with much of the profit either re-invested or held as reserves. The employees also shared in the rewards from their efforts with bonus and share option schemes.

Despite what some might describe as a cautious financial approach, 3P witnessed many years of double-digit growth. The founders continually took a long-term view, investing in staff and facilities. To this end, succession and legacy were considered well in advance of necessity, that is, when the remaining founders were ~5-10 years before retirement. There was no desire to parachute in any of the various founder’s children to take over the business – as a business set-up by 6 equals who went on to give share options to many of the staff,  3P was never a traditional family-owned business.  The founders had (in a previous “life”) witnessed the worst excesses of Western Capitalism and the destruction of sound family-owned businesses via trade sales to corporations traded on stock markets. Wealth can unfortunately be asset-stripped in a fraction of the time it takes to build it. Whilst potentially very lucrative for the founders, a trade sale didn’t match the aspirations of any of the founders, and by this time circa 90% of the current staff either held shares or had share options. 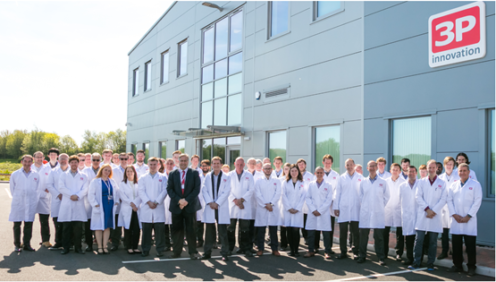 3P staff at the grand opening of their purpose-built building.

The up-and-coming managers were consulted with various options for future ownership. These included: trade sale, various Management Buy-Out structures and conversion to employee ownership. Because the future management team shared a similar ethos to the founders, there was overwhelming support for conversion to Employee Owned. This decision was taken in early 2019 to convert to an employee-owned trust. The formal conversion actually took place in late 2020, such that 3P is still within the foothills of that particular journey.

Employee ownership isn’t a new idea (c.f. John Lewis, the UK’s largest and widest known employee-owned business, became an employee-owned trust in 1929) and it is currently gaining favour across a broad range of sectors. The government also recognise the benefits: numerous academic studies have demonstrated that employee-owned businesses are more productive, grow faster, and are less likely to go out of business than their counterparts. Employee-owners also tend to earn more with better benefits, and are less likely to lose jobs to cuts and outsourcing during a downturn, compared with workers who don’t have ownership stakes.

Within the UK the employee-owned sector is represented by the Employee Ownership Association (EOA – www.employeeownership.co.uk ). As you might expect they extol the virtues of employee ownership. Some of their recent reports present a very positive outlook for EO business. Their research demonstrates that EO businesses: –

Does this sound like the Mittelstand? We think so!

The employee-owned sector is growing rapidly. It contributes over £30billion in GDP to the UK economy and has received serious government attention. Following the UK government’s 2012 Nuttall review, the benefits to the wider UK economy were recognised with various recommendations to encourage and promote the sector. In 2014, a variety of tax exemptions to incentivise conversion to EO were introduced together with some employee tax-free rewards. Until very recently, the UK EO sector used to be dominated by a few large businesses. However, the last few years have seen employee ownership as an attractive succession option for SMEs and family businesses. The government focus and positive news stories have driven over 50% growth in the number of UK EO businesses since 2017. In fact, in June 2020 there were 470 UK EO businesses up by 100 from the previous June 2019. We know of at least one more successful high tech engineering business since then! It is no surprise that the sector is dominated (almost 30%) by professional services companies, which is a significant proportion of 3P’s offering to international clients. Likewise, a significant number of the professional service companies that 3P associate with are also employee-owned. The authors have noted a shared culture and ethos with these companies (in fact 3P’s management team met informally with some of these companies prior to the decision to become Employee owned – often in life if ‘it sounds too good to be true’, it usually is. Thankfully, 3P’s experience is that this isn’t the case with employee ownership. 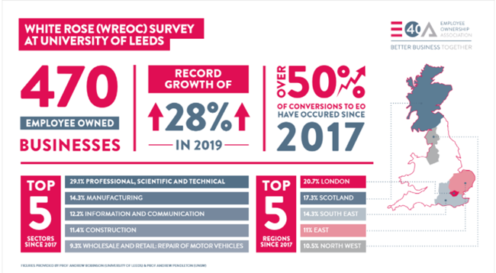 In this blog we have tried to demonstrate that much of Germany’s industrial exporting is due to their embedded culture of Mittelstand. We hope to have shown that the cultures of Mittelstand and UK employee-owned businesses are very similar with many parallels – a “Brittelstand” if you will?

Will employee-owned businesses drive a similar success for UK exporters? We certainly hope so. 3P, as winners of the 2021 Queen’s Award for Enterprise in the International trade category, intend to play our part.