As one of the world’s leading architectural heritage conservation experts, Purcell took seven years from initially finding out about employee ownership to becoming an EO business in May 2021 – a structural change for the company “the likes of which it has never seen before” in its 74-year history.

“Purcell’s pathway to EO took some considerable time in comparison to others and of paramount importance was our desire for the transition to succeed. We firmly believe the length of time and effort taken to realign our culture will pay off in the longer term as we now have a team of happy employees who have bags of energy and high morale, while all speaking the same Purcell employee ownership language,” explains Chief Executive Mark Goldspink.

Purcell became employee owned in May 2021, having recognised its culture had grown to align with many of the values associated with an employee-owned business.

But Purcell took its time – with partner Mark recalling a meeting he had with his accountant in 2014 who “opened my eyes to the possibility of employee ownership”, and after some research and initial meetings with the Employee Ownership Association (EOA) it “became apparent this would provide an ideal solution”.

Even though the pandemic delayed the change to employee ownership by a year, having been due to transition in May 2020, the length of time taken by Mark and his co-partner was very much a deliberate ploy.

For the award-winning architectural and heritage consultancy practice, which employs 250 people across the UK and around the world, making the decision to become employee-owned was a pivotal moment in its 74-year history that took careful planning to ensure sustainable future success.

Why was employee ownership the right fit for Purcell?

Between 2016 and 2018, several of Purcell’s then co-owners retired, leaving Mark and one other owner remaining. “We were responsible for 250 people and succession therefore became a hot topic to resolve,” he says.

“I am in the firm belief that I am only a steward of Purcell and that the time of my stewardship has a shelf life. We have an amazing team here and we wanted to safeguard our ownership and independence in perpetuity, benefitting our employees and of course our clients.

“We had a very clear desire not to sell Purcell externally. We wanted to leave a legacy for a new generation of owners.”

How did it go about achieving employee ownership?

For Mark, who joined Purcell in 1989, and his fellow co-owner, the idea of creating an emotional engagement with their employees, rather than purely trading for a financial result, resonated with them and “aligned with the existing and strong Purcell ethos”. 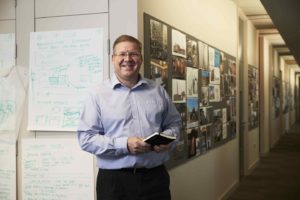 They started communicating their ideas on an away day in October 2016 and the initial feedback was positive. Attending EOA forums taught them the creation of a clear set of values “would help inspire engagement in a common purpose”, which led to the appointment of a people director to join the board.

In 2018, a dual-purpose document set out the company’s five-year business plan and, in addition, the Purcell Constitution was launched to explain, among other things, how it wishes to operate as an employee-owned business.

A series of roadshows every six months to each of its 12 studios reinforced that “everyone has an important role to play and the potential to contribute to the success of Purcell”.

“The theme of early engagement on EO has been very important to us,” says Alasdair Jones, Associate and member of the board of trustees, who is part of Purcell Voice – the company’s first employee forum, which was established in 2018.

“Opportunities were made for employees to engage with the idea of employee ownership early on in the process to ensure as wide an understanding and engagement as possible.”

A timetable was set out that was regularly updated and shared with colleagues, while three important goals for transition were communicated: strong cash liquidity; a cultural shift – that’s a mindset of ownership; and greater employee engagement.

Due to the length of time taken to make the change, when Purcell finally transitioned to employee ownership in May 2021 “we had the confidence the baton of ownership would be handed over to a capable and committed collection of people,” added Mark.

The initial impact of employee ownership

The Employee Trust now owns 70% of the business, with the remaining 30% transferring over the next few years.

The delay of 12 months due to Covid-19 was known to the Trustees as a ‘bonus year’, allowing them “to have an initial dry run”, establishing the nature of the relationship between the company board and Trust.

Liz Smith, the new Chair of the Purcell Board, insists employee ownership has “reinforced the collaborative approach which has always underpinned how we work at Purcell”.

She added: “We are many voices who come together with enthusiasm to support each other to achieve collective success. Employee ownership is enabling a new generation of owners to find their voice and play an active role in leading our business.

“We now have focus groups run by different architects which enable staff at all levels to come together to encourage innovation, new ideas and broader ownership of our goals.”

Purcell undertook a survey to understand levels of engagement among staff following the transition to employee ownership and almost 90% of people answered positively to the question ‘I believe I can make a valuable contribution to the success of the practice’ – a significant increase on previous surveys.

“In this brave new world of employee ownership, the collaborative spirit that unifies and inspires us all is stronger than ever,” concluded Liz.

Purcell was telling its story on day three of the virtual EOA Annual Conference 2021, the sessions from which are available on demand for 60 days after the event. To find out more or to register, click here >>