A platform hire company from West Yorkshire admits one of the most important lessons it has learnt from its transition to employee ownership is to take advice from other businesses that have been through the process.

Horizon Platforms became employee-owned in February 2021 and found it “so helpful to get other perspectives” during the year-long process.

The Normanton-based company says the “invaluable advice” it received from Employee Ownership Association (EOA) members helped it see the benefit of taking its employees “on that journey with us”.

The ownership of the access rental business, which was formed in 2008 and has a fleet of 850 aerial platforms managed from its “super depot” near Wakefield, has moved to an employee ownership trust (EOT) to allow its 75 staff to have a stake and a say in the company.

The business shared the lessons it learnt from the process at the EOA Annual Conference 2021 to help others considering transitioning or those just starting out on their journey. 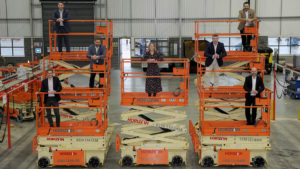 Founder Ben Hirst and Director of People and Internal Communications Lucy Normanton gave insights on how the Horizon leadership team worked to ensure the messaging was delivered “in a way which resonated with our team”.

“I think it’s fair to say there was an aim to create excitement from this transition,” Ben said.

“Horizon was the first, and still the only, company that operates in our industry that’s employee-owned and that we believed the team would be excited about.

“This was the biggest piece of communication we had ever landed into the team, so of course we were nervous. We majored on the point that at some point in time all businesses have to change ownership, that we’re getting our ducks in a row and planning for the future.

“We as the founders and owners are going nowhere, and we were keen to offer reassurance that this is good for them, good for the organisation and allows Horizon to live on for the long term.”

Initially, the plan had been to tell employees about the transition on the day it happened, but speaking to EOA members helped Horizon realise the benefits of communicating the news before it happened “so they felt involved”.

This advice led the leadership team to change the timeframe for communicating the news internally. It instead told the management team four weeks ahead of the completion date so that it “understood and were on board with it”. It used this process as a “dress rehearsal for telling the wider team”, which happened a week later.

“We did our homework and took invaluable advice from other EOA members. This enabled us to deliver our messaging in a way which felt right for us as a business, and most importantly, for our co-owners,” said Lucy.

“I think the changes we made on the back of advice we had from others really helped for the news to land as it did.”

On the advice of other employee-owned businesses, Horizon also took the step for the announcement to be made by the leadership team, not the founders, “so that the communication came from the buyers not the sellers” and the message could be more around the employees “being given the opportunity to buy the business” rather than them hearing ‘the business is being sold’.

To ensure the message hit home with employees, Horizon Platforms formulated a communications strategy which had three main objectives.

“The first of these was around understanding and making sure people got what was changing,” Lucy added.

“Employee ownership and that shift was quite a big deal, so we wanted to message it in a way where those key points landed with people and they understood.

“The second objective was to make sure we didn’t over promise to people and we managed their expectations. It’s easy to fall into the trap of everybody thinking they are going to become a millionaire overnight and that wasn’t going to happen, however there would be some financial benefits to be felt over time, so it was about getting that clear.

“Lastly, it was about reassuring them that we weren’t overhauling the culture, it’s a fantastic place to work and it will continue to be so, so we weren’t planning on changing that aspect of Horizon.”

Ben added that the process of electing two trustee directors, which was finalised two days before the completion of the sale, “allowed everyone to have a better grip of what was happening”.

“On the back of some other advice, to give the team the opportunity to vote one of their colleagues to become a trustee board member they’ve got to understand what they’re actually voting for,” he said.

“This forces a deeper level of learning and interest in what employee ownership is all about. So, on reflection, the election process was a critical element of the communication of the transition.”

Horizon Platforms shared its story on day two of the virtual EOA Annual Conference 2021, the sessions from which are available on demand for 60 days after the event until January 17. To watch the full session, to find out more or to register, click here >>

What is employee ownership?