ProTech, which is one of the fastest growing technology and engineering recruitment agencies in the UK, has transferred 100% of shares to an employee ownership trust (EOT) for the benefit of its 14 employees.

The decision to become EO was triggered by a conversation with another employee-owned businesses that is based in the same building.

The Hertfordshire firm, which was founded in 1988 and specialises in the scientific, technology, engineering and manufacturing sectors, was 60% owned by Managing Director Antony Cox – who bought the company in 2003 as part of a merger – and 40% by Director Roman Motyczak. 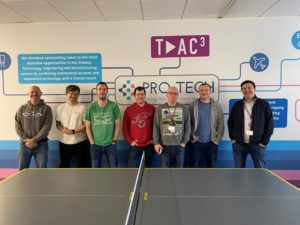 Antony and Roman had started to think about succession planning a few years earlier, “mindful of the fact we’re not getting any younger”.

Before the pandemic struck, ProTech had been growing “fairly steadily” at an average rate of 20-25% a year, but Antony admits Covid “set us back five years and got us thinking about other ways of exiting the business”.

He says a referral from a member of the Employee Ownership Association (EOA) opened their eyes to the ownership model and set the ball rolling.

Antony said: “We found out that neighbours in our building, Blizzard Telecom, had transitioned themselves into an EOT in 2020 and I was talking to them and thought ‘actually, that’s worth investigating’.

“That got me thinking, ‘if they’ve done it, could we do it?’ That’s how it all started, in terms of the idea of it as a possible exit route, and from there two directors of Blizzard gave us the inside track, which was really useful.

“It was a good choice for us, probably being too small for anyone to be interested in buying us as a commercial sale. Furthermore, it gives our people complete control over their future, which is the opposite of what a commercial sale would bring.”

The process of transitioning to employee ownership

ProTech, which provides skilled people on both a temporary and permanent contract, appointed EOA supporter members Baxendale to steer it through its employee ownership journey.

Director Roman says Baxendale made the whole process “low impact and straightforward”, revealing its advisers visited the whole ProTech team around a month before transitioning to make the internal announcement.

“It helped having a third party come in and make that announcement, to talk about it conceptually and then we were able to follow up and field questions,” said Roman.

“Advisers had initially talked us through what it meant and the more we heard, the more we thought it ticked quite a few boxes on what we wanted to do.

“It gives those people that have worked with you, particularly over the two years of Covid, a chance to own the business and benefit from it.

“In our minds, it was that duty of care by them benefitting after we have sold the business, whereas if we’d sold to a third party they could have had their own plans and before you know it the business has disappeared and all the staff have gone and we would have felt quite guilty.”

ProTech has tabled a four-year plan to pay back the loan, while it has also set up an EOT board made up of Roman, an employee-elected trustee, Jacob Trigg, and an independent trustee.

As part of its ongoing business planning, ProTech has also announced the appointment of long-serving team members Ismail Mansoor and Samantha Morgan to the Board of Directors.

Employee ownership is one of the fastest growing business succession solutions in the UK, where there are now more than 800 employee-owned businesses – with more than 300 of those having transitioned since 2020.

The fast pace of growth amongst businesses has taken off with the use of the EOT, introduced by the government in 2014 to encourage long-term employee ownership, with ProTech joining a network of EOTs in the UK that include Richer Sounds and Go Ape.

James de le Vingne, Chief Executive of the Employee Ownership Association (EOA), said: “We congratulate our members ProTech on its transition to employee ownership; securing the ethos, values and culture of the businesses, as well as rooting jobs in Hemel Hempstead.

“Businesses that give employees a stake and a say build trust and shared responsibility, uniting leaders and employees behind a common purpose, and leaving businesses in a better position to flex and adapt.”

What swung it for Go Ape to realise employee ownership was the right path to safeguard its ‘very unique’ culture?

Listen to the latest episodes of the EOA Podcast here >>