A recent piece of research at the Institute for the Future of Work showed that voting patterns strongly correlate with the perceived risk of job automation in an area.

You can read our report here. It’s clear to me that uncertainty about the impacts of automation is a top of mind issue for many people, especially in regions with industries where the likely impact of automation is very visible.

AI, automation and new ways of doing things online have already transformed some industries – such as manufacturing where we’ve seen a reduction of workforce as lower skilled work is replaced by machines, and retail where we’ve seen a decline in high street jobs as more people shop online.

The scope of this impact in the future as more technology is rolled out is likely to be across the board – not just impacting lower skilled jobs such as warehouse workers and delivery drivers, but professional roles too. We recently heard about how AI has a higher success rate at detecting breast cancer than humans. There are similar breakthroughs in other professions – law, accounting, teaching and my own profession – engineering.

Our economy needs improved productivity if it is to provide good quality work for everyone and that comes with the adoption of new technology. But new technology doesn’t have to be all about people losing their jobs. The breast cancer example is one where the likely outcome will be professionals supported by AI. Teachers may get significant AI support for tasks like marking allowing them more time to focus on individual needs. Lawyers, accountants, doctors, engineers may get AI decision support to help them focus on more subtle, human factors. One of the key themes that has been emerging for the Institute for the Future of Work is how much difference it makes to outcomes if employers, governments and tech developers are thinking about the people first as they plan for new technology.

Most workers have parts of their job they would cheerfully let a machine do – there is drudge work in any role and – happily – AI/automation is often ideal for such repetitive tasks. So if technologists, governments and employers are thinking about people first – asking themselves which tasks their employees would be delighted to see automated, how technology might help people to have a more fulfilling role, we believe that the productivity gains can be achieved, boosting the economy, creating new, fairer and better work and resulting in more fulfilled employees. A virtuous circle.

Putting people first is not new. Employee engagement is well understood to be at the core of successful transformations. Whether a company reaches the gold standard of being employee owned, has found a way to share the financial benefits of improved productivity with its employees, or is just doing a great job of engaging with the employees about potential changes and asking them to contribute to the planning – the likely outcome of a transformation in technology and working practices is better.

We know, from our research, that the fourth industrial revolution will bring in mass automation. We also know that a people centred approach won’t happen automatically. The time is ripe to invest in technology – and the processes and people – to do it properly. Let’s work together to build a world where automation is making us more productive, engaged and happy – not less. It’s possible if we take the right steps now. 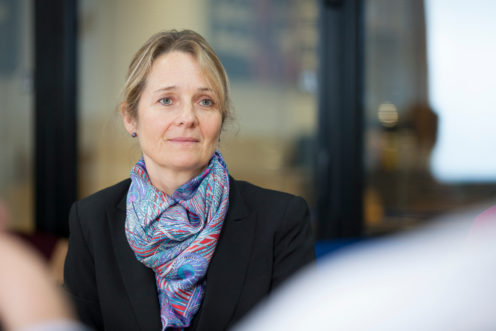 Naomi Climer CBE, Co-Chair of the Institute for the Future of Work, is an engineer and leader who is now a non executive director on the Boards of a number of quoted companies and charities. Naomi’s career has been in broadcast, media and entertainment technology, ultimately as President of Sony’s Media Cloud Services after which she became the first female President of the Institution of Engineering and Technology. She will be delivering the EOA’s 2020 Robert Oakeshott Lecture entitled “The Rise of the Robots: What Role for Employee Ownership in the 2030 Economy?”