‘Make sure you shout about employee ownership from the start,’ says Jerba Campervans founder after double award

Jerba Campervans founder Simon Poole admits the biggest benefit from winning a double accolade at the IoD’s Scotland Director of the Year Awards was the chance to further shout about employee ownership (EO).

Simon won the Institute of Directors’ National Small-Medium Business and Edinburgh & Lothians Regional Director of the Year awards in December 2021.

The wins recognise his work managing employee-owned Jerba Campervans, which he co-founded with wife Cath in 2006, with the judges describing Simon as a great example of an authentic leader. 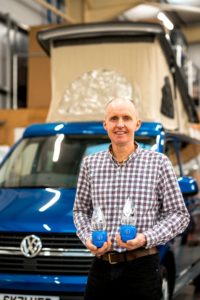 “I’ve never actively pursued awards, it has never been on my agenda as I have been concentrating on growing the business,” he told the Employee Ownership Association (EOA).

“But I was nominated by someone who is well known in the employee ownership world and I thought ‘you know what, I should make the effort here’.

“I can’t deny it’s nice to win the awards, but what is more important is it enables me hopefully to raise the profile of employee ownership as a solution to business succession.

“I think awareness of employee ownership is probably low for many people who run their own businesses, and there might be some scepticism on whether it works or is something that is feasible.

It comes as the Volkswagen campervan conversion company, that is based in Scotland just east of Edinburgh in North Berwick, celebrates four years since it transitioned to employee ownership.

And the 55-year-old, who also works with Scotland for Employee Ownership and Cooperative Development Scotland (CDS), insists the biggest lesson he has learnt since the change in January 2018 was not shouting about its employee-ownership status loud enough from the start.

“When we became employee-owned I probably wasn’t bullish enough about putting it front and centre telling people that we are,” Simon added.

“Making sure the employees were on board was the number one focus at first, because you have to make sure they are with you and they understand what the process is, how it works and what it means in the longer term.

“But it then became apparent after about 18 months that we really should be shouting about the employee ownership louder.

“So we integrated it into our logo so on every bit of material we now have it quite clearly says ‘100% employee-owned’ and in my view, not enough companies do that.”

With 13 employees based at its North Berwick site, a 2021 turnover of £3m was achieved and since its move to employee ownership productivity has grown year on year.

Simon, who is set to move into the chairman position at Jerba and is advertising for a new managing director to help the company grow, also believes employee ownership has struck a chord with customers.

“I think, since Covid, the employee ownership model has definitely become more of a focus for customers. I think your social values, how you treat your employees and the ethics of the business have become much more important,” he said.

“There is hardly ever a customer who doesn’t mention the employee ownership model as a reason why they have chosen us. I think they have tacitly put their backing behind this sort of model as being where society needs to be going.

“Employee ownership is a real point of difference from a marketing view to separate yourself from the competition as customers and suppliers are more interested now in how you treat your employees, how you reduce inequalities of income and how you impact local communities.” 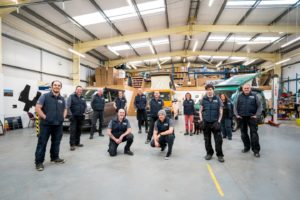 The team at Jerba Campervans

Around five years ago, around the same time Simon and Cath were considering business succession options as they reached their 50s, they were aware of the fact the majority of their employees were in the 45 or 50-plus category.

They recognised they needed to do something over the next five to 10 years to bring in a younger group of people who can “take the business forward” and opted to bring in apprentices.

“When you are small as a business it’s hard to bring in young people and train them up because you just don’t have the capacity to do that,” Simon added.

“When I started out I was employing people with skills, but as we’ve got bigger it allows us to say ‘I don’t necessarily need the polished skills, what I need is someone who has got potential and the right attitude’.

“So now, unless it is for something that is more technical or more senior, anybody coming into the business at the less-skilled end, we will get younger people.

“That’s been the policy for the past three years and it’s worked really well, and we’ve now got three fantastic apprentices who hopefully will be here for a long time.”