“Employee ownership is so important for us – because for us as a business everyone needs to have that empowerment, that voice, and feel that the organisation they own is something they’re proud of and something they want to be part of.”

For Scott & Fyfe, it’s all about employees being at the “heart of the business” – and its innovation tree, pictured, based in the centre of its site in Tayport, Fife, is testament to this. 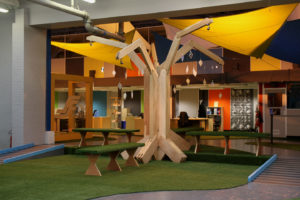 Having created a colourful, “open and collaborative” innovation space described by Operations Director Michelle Quadrelli as “Google meets Teletubbies”, the company has incorporated this innovation tree in the centre of this and every time it develops a new product a leaf is created that hangs from it.

“The tree is in the centre of the whole site and it’s about growing this business and growing it within this site here and everyone growing it together,” Michelle says.

The Scottish firm became employee owned in December 2012, but has been designing and producing a vast range of technical textiles for global markets for over 150 years, having been run by four different generations of the same family before its transition.

Originally set up as a linen works in 1864 and then focussing on industrial textiles, including manufacturing jute fabrics that were an essential product during World War One, Scott & Fyfe has diversified over the years amid a previous dependence on declining products and markets – with its main value streams now being around products for the irrigation and pipe repair industries.

The switch to employee ownership

The family owners began thinking about succession options around 2010 and opted for employee ownership as it was important for them that the business stayed in Tayport, that it was secure and supported the workforce that was there.

After transitioning in 2012, the business described it as a “new era where employees and the Tayport community will reap the benefits”, with its employee ownership centred on “an ethos where we work together as one team, with one vision, to build a stable future for all our stakeholders”.

Scott & Fyfe has a hybrid model where the business is owned only by current employees, either directly or indirectly through its Employee Benefit Trust (EBT).

The EBT holds at least 51% of shares to have the majority of the shareholding, while direct ownership is achieved through a combination of a share incentive plan (SIP) and an enterprise management incentive scheme (EMI).

At the time it was looking into employee ownership, members of the team from employee-owned Gripple – which has a direct ownership model where employees own shares – visited the Scott & Fyfe site and told stories about people being able to pay off their mortgage or retire early.

“I remember at the time thinking ‘gosh, really, is that really possible?’ So it was great to then see some instances of that come through here,” Michelle says.

“In 2020, we had our best year on record and saw a significant increase in our share price. We had some employee shareholders that had invested from the beginning and who’d worked for the business for a long period who were in a position to retire early because of what they held within their shares.

“It was great to see these individuals, who had put in so much effort through the years to help the business become as successful as it has, be able to do this and spend time with their family quicker than they would have. They never would have had that opportunity if it wasn’t for employee ownership. That really hits home how great it is.”

The importance of having engaged, happy employees

“That’s definitely important for us,” Michelle explains. “Especially when we were going through some challenging times and you have to make decisions that are tough, it’s how you keep employees on side and keep up morale.” 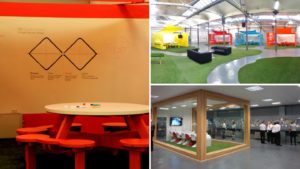 One way it has managed to do this is by creating a lay-out “which sparks collaboration, new ideas and inspiration”. The custom-designed innovation space, developed in conjunction with interior design students from The Glasgow School of Art, was unveiled in November 2012 just before it transitioned and did away with formal meeting rooms.

Michelle says the space helped them grow closer as a team and build that ethos of collaboration, “which all helped as we moved into employee ownership”.

She added: “When we have meetings it’s not around a spreadsheet, the actions go up on a whiteboard which is known as the ‘wall of shame’ because we all come back the week after and it’s all there, it’s not moved, it’s very visible as you walk past, and it really is our action list of how we move things forward with the business.

“For us, it’s so normal now that it’s really interesting when people come in here for the first time and you see the expression on their face. As you approach Scott & Fyfe we’ve still got the old building from 1864 with the new industrial units off it, it looks very much like a typical manufacturing unit and when you step in it’s completely not what you would expect.

“It’s very relaxed, despite being a fast-paced business. We run training in the space and one session we did had exercises where we were firing catapults across the innovation space. It’s great to have the space to do that. It’s just a really great environment to work in.”

Michelle from Scott & Fyfe appeared in Episode 6 and 7 of the EOA Podcast, listen to episodes here >>