Following his contribution as a speaker at the EOA Annual Conference 2021, Jake Hallatt – a 22-year-old graduate management trainee at employee-owned Gripple – has produced a guest blog on why he is so passionate about spreading the employee ownership (EO) message to younger people. Jake is an elected employee representative on the Glide council, which represents all the shareholder members who work in its partner companies like Gripple. A former apprentice of the year award winner, read Jake’s blog here:

When I was elected to the Glide council, I was just 18 and our youngest elected employee representative – probably by a few years. 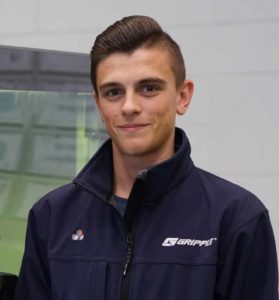 I had been with Gripple for a couple of years, having started out part-time at 16 alongside my college studies, and got asked to apply. I put my name forward with the impression that I probably wouldn’t get in, because I was too young and did not have enough experience in a business environment.

After I got elected, I had discussions with people who voted for me and they said it was good to have younger people as representatives, because all age groups have different views and bring different things to the table.

I have been an elected representative on the Glide board for three years now and my four-year term is coming up in July. As part of my role, I am one of the 38 representatives globally who help to embody the culture we have at Gripple and within the Glide group, to voice the opinions of our members, to hold our leaders to account and help support the facilitation of shares.

We’ve now got a lot more of the younger generation on our Glide board as five out of the 38 are under the age of 25, which is great to see. I think it’s very important to have that mix of different ages and opinions because with employee ownership, we’re going to need the younger generation to be able to grow it.

They’re the future of the sector and the businesses so we need to make sure that they are moving it forward as much as everyone else is, because they’re the ones that are going to take it forward in the future.

At Gripple, we develop a lot of the younger generation to become future leaders within the business.

A few months after I joined Gripple at 16, I was offered an apprenticeship in plastic injection moulding, which saw me manufacturing internal plastic components of Gripple’s wire products.

After three and a half years, I was made an assistant team leader in the department and a year later – despite not being a graduate – I was offered the great opportunity of moving onto the graduate management scheme.

As part of the scheme, you do rotations of up to three months in different areas of the business and within that time you get given quite chunky projects that are valuable to the business, so you’re not just getting low-level projects that aren’t going to have much impact.

An example of a project I worked on was in our design department. We have approximately 15,000 plastic tubs we use in and around our sites in Sheffield and my project was to work out the costing of manufacturing them internally and working with our designers to come up with an improved and suitable design for us. We ended up going ahead with it and now we manufacture our own tubs, so it was good to see a project I worked on meant something to the business and resulted in an annual cost saving.

On previous networking sessions I have been on that are not employee-ownership related, I have been quite a bit younger than everybody else and I don’t feel like I get enough recognition.

Getting that message across is one of the things I want to drive in the EO sector, and to the other younger employees within employee-owned business – to highlight to them that it is different to where you have previously worked in that you do get recognition within these businesses, it’s a much more comfortable situation to be in, people are happy to speak to you and understand your views.

I think the challenge is making sure all employees, especially new starters and younger people, are aware that employee ownership is not just about the financial side, it’s about creating and developing a unique culture and making sure they realise the benefits of being an employee owner.

Jake was a guest speaker on day one of the virtual EOA Annual Conference 2021, the sessions from which are available on demand for 60 days after the event. To find out more or to register, click here >>