The EOA welcomes today’s debate at Westminster Hall on co-operatives and mutuals, which included the impact businesses owned by its employees can have on the economy.

Steve Baker, the Conservative MP for Wycombe, brought the debate – titled ‘The contribution of co-operatives and mutual societies to the economy and public life’ – on behalf of Co-operatives UK, which has tabled a brief and policy proposals to the Government.

The parliamentary session heard contributions from MPs across all the main political parties, who championed examples of co-operatives and mutuals in action in their constituencies.

Deb Oxley OBE DL, Chief Executive of the EOA, who welcomed the debate giving this part of the economy more publicity and shining a light on its impact, said: “There is a really obvious Venn diagram to explain what can often be misunderstood and therefore under appreciated. 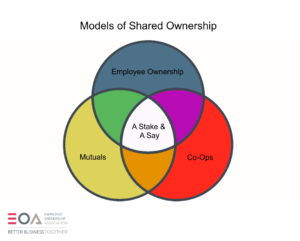 “The reason they are all part of the same family, and they share that Venn diagram, is because each of those three models are about a different form of shared ownership – about employees having a stake and a say,” she said.

“The target audience is different for each model, but the three of them share a similar objective, which is that ownership should be in the hands of communities of interests, who are not distant shareholders that make decisions not always based on the best interests of the long-term prosperity and resilience of the business.”

Mr Baker opened the debate by stating the UK co-operative economy is “small and growing slowly”, with less than 1% of UK businesses being co-operatives, before showcasing its positives.

“Perhaps it’s the case that the co-operative model is under-utilised and something of a best-kept secret in our society and economy,” he said.

“However, the model can lead to a proliferation of co-operatives that can strengthen the private sector, because co-operatives are distributive by design, where value, wealth and well-being are shared more broadly.

“At a time like this, when we need to recover from coronavirus, co-operatives can be an ever more important part of our society, bringing people together, giving them shared purpose and an equal stake in the business they work.”

The session went on to hear from a number of MPs from England, Scotland, Wales and Northern Ireland – with cross-party support on show for the benefits of shared ownership models. There were also numerous calls for changes to legislation to help the sector grow.

Luke Pollard, Labour MP for Plymouth, Sutton and Devonport, spoke with passion for businesses seeking out “alternative models” of ownership, with the values he spoke of mirroring those embodied in employee-owned firms.

He said: “We are seeing the context change, we are seeing a hollowing out of our communities and a more precarious environment for businesses, but we’re seeing no less entrepreneurialism, drive and creativity from our businesses.

“People are now looking at alternative models to organise their businesses. When workers have a stake in their own business, they can contribute to the decisions that are made, they can see that businesses can be better run, more sustainable and better focused.

“There is an energy around this policy area because it’s the scene of so much innovation and it’s innovation that is often at the periphery, because co-operatives and mutuals are not in the mainstream as they should be. Now is the time to move them into the mainstream, to have them not just as a niche provider.”

Minister John Glen, the Economic Secretary to the Treasury, committed to “reflect carefully” on the proposals from Co-operatives UK and the contributions from MPs during the debate.

However, he added: “I think it is important we get that balance between hearty aspirations for a healthy sector, receiving appropriate consideration for reasonable changes to the rules and regulations underpinning them, and a sort of doughy-eyed romanticism about things that actually are not financially secure in the medium and long term.

“My job is to interrogate those opportunities, where I can take legislative action, but be clear we’ve got to have a clear, economically valid approach to this if we’re going to have a secure and thriving sector.”