The Employee Ownership Association (EOA) team would like to pass on its heartfelt condolences to the Bader family after Scott Bader Life President Godric Bader passed away at the age of 98.

Godric played a pioneering role in the employee ownership sector and important role in the history of the EOA since its inception – with his contribution being marked in 2021 when he won the ‘Celebrating a True EO Champion’ accolade as part of our EO Stories competition.

In a statement, EOA Trustee member Scott Bader announced “with a heavy heart” that he had passed away peacefully at home.

It added that Godric made an “incredible contribution” to the business and will be “sadly missed”, adding: “The legacy he has brought to Scott Bader has been widely recognised and it will continue for generations.”

Leading the tributes from the team at the EOA, Chief Executive James de le Vingne said: “The EOA team is sad to hear of the passing of Godric Bader, a true innovator of his time and life-long champion of employee ownership.

“Godric’s belief that business can be fair, moral and successful will be his enduring legacy, and this will live on within the Scott Bader Commonwealth, and his influence felt and recognised by everyone in today’s EO community.” 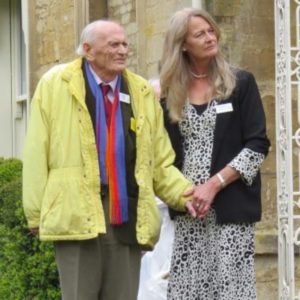 Employees put Godric forward in the EO Champion category in 2021 to mark 100 years of Scott Bader Company Limited and 70 years of the Scott Bader Commonwealth Limited. After a public vote, he was the clear winner.

Godric’s father Ernest founded the company and in the competition entry, his impact on Scott Bader and the EO sector was detailed.

“The guiding principles that Godric and his family established when forming the Scott Bader Commonwealth have successfully steered the organisation for over 70 years,” it said.

“Godric joined the family firm in 1947 and both he and his father had a shared vision to find a way to help people seek a better way of living for themselves, but also to identify an improved way of doing business and of running the world’s industries.

“Determined to see their vision come to fruition, and based on their Quaker beliefs, Ernest Bader and the family shareholders put the shares into a Charitable Trust administered by Members of Scott Bader Commonwealth Limited and external Trustees and thus in 1951 the Scott Bader Commonwealth (SBCW) was formed, an industrial democracy and registered charity.

Watch back our video case study of Scott Bader from 2021 in which Godric spoke of his father’s “cosmic vision”: