About Our Founder – Robert Oakeshott

Robert Oakeshott is the employee ownership pioneer who founded the organisation which became the Employee Ownership Association, today speaking for hundreds of co-owned companies in a £30 billion sector of the UK 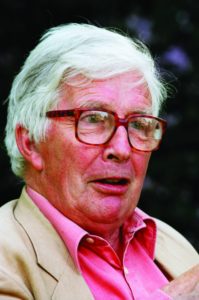 Born in 1933 and educated at Winchester College and Balliol College, Oxford, Robert became a journalist with the Financial Times before moving to Africa to work on economic development in Zambia and Botswana. The 1970s saw him back in the UK and promoting worker co-operatives. An early result was the formation of the Sunderlandia building workers co-op in 1973, inspired by his visit to the giant Mondragon cooperative in Spain’s Basque region. Two influential books followed: The Case for Workers Cooperatives, and Jobs & Fairness: the logic and experience of employee ownership. Later, following a visit to homecare cooperatives in New York, Robert worked with the inspirational Margaret Elliott to set up employee owned Sunderland Homecare, which in turn led to the formation of several more co-owned home care companies in the North of England.

In 1979, inspired by developments in the USA and with the support of Liberal Party leader Jo Grimond, and the Joseph Rowntree Reform Trust, Robert established Job Ownership Ltd [JOL] and began campaigning for the UK and other European governments to back incentives for businesses to share ownership with their employees. Among his successes was persuading the UK Government to pay JOL to promote EO in formerly communist eastern bloc countries. Job Ownership’s international perspective was cemented through a series of annual conferences held at Merton College, Oxford.  Although he had by then stepped down as JOL’s director, the 2002 Share Schemes Act owed much to the breadth of support Robert had won for employee ownership. Robert remained on the organisation’s board during its transition in 2004 to becoming the representative body for the UK’s EO sector. In 2007 the organisation formalised its changed status by renaming itself the Employee Ownership Association.

In 2012, a year after Robert’s death, and with the active support of his family, the Employee Ownership Association inaugurated an annual Lecture in his name. The first Oakeshott Memorial Lecture was delivered by the then Deputy Prime Minister, the Rt Hon Nick Clegg MP, who announced Coalition Government support for employee ownership and the formation of a major policy review into the sector’s future chaired by Robert’s longtime colleague Graeme Nuttall of Fieldfisher LLP.

Leading a tribute to Robert at the EOA’s 2009 Summer Dinner on the occasion of the organisation’s 30th anniversary, EOA’s then president, Sir Stuart Hampson, Chairman of the John Lewis Partnership said:

“Robert has been a genuinely unique pioneer of employee ownership, and a pioneer not just in the UK but in the world.”

David Erdal, Robert’s successor as director of what was then Job Ownership, and a founding director of the Baxi Partnership, wrote these words on the death of Robert Oakeshott in 2011:

“How would Robert, never constrained by convention, want us to say farewell? As he made us love him: in long lunches, packed with stories, ideas and laughter, over copious quantities of red wine, and followed by new initiatives in employee ownership.”